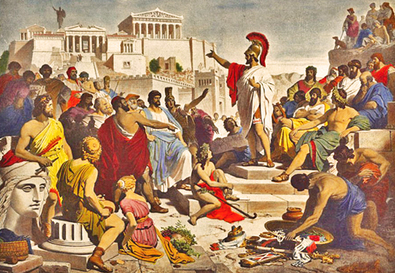 Demagogues?  In its modern pejorative sense, a demagogue is one who seeks power by exploiting the prejudices of the mob. But in the original 5th century BCE Greek usage a demagogue could also be simply a leader of the people, from demos “the people” and agein “to lead.” So Alan Ryan in “On Politics” can say of the greatest leader of Athenian democracy:

Pericles’s hold over the Assembly was that of a demagogue, a leader of the demos, or common people. Those who thought ill of him, including Plato, did not hesitate to call him a demagogue, in the modern, abusive sense, meaning someone who cajoled the foolish many into doing whatever he wanted.

Anyway, let’s say the Times here is pointing to a weakness of democracy, of giving power to the people, who can be bamboozled by demagogues.

“The Italian elections on Sunday were the latest powerful wave in a tidal turn of anti-immigrant, anti-European Union and antidemocratic fervor.”

Wait. I can see how the Italian fervor is ‘anti-immigrant’ and ‘anti-European Union,’ but how is it antidemocratic?  Didn’t the Italian election just demonstrate the power of democracy – for better or worse – by throwing out one group of failed rulers in favor of new leaders, called demagogues by the Times?  Or were the voters backing parties that seek to end democracy, in the manner of the communists and fascists of yesteryear?  No, not that either.  The populist Five Star Movement, one of the biggest winners in the election, is, if anything, ultrademocratic.  It conducts its party business through direct voting by all members on its ‘Rousseau’ internet platform.  It champions a nationwide direct ‘e-democracy’ that would settle issues through frequent or continuous internet referenda.

The Times doesn’t explain. It appears to be using ‘antidemocratic’ as an emotive cry of outrage and abuse, something like ‘you bastards!’  For the populace to avail itself of democracy to check the imprudent, even reckless, social engineering projects of Western ruling classes – mass immigration, globalization, the weakening of nation states at the hands of identity politics, on the one hand, and supra-national governance, on the other – well, that is antidemocratic by definition, it seems.